Some 2,300 miles south of Moscow in the middle of the Aral Sea lies one of the darkest secrets of the Cold War: Vozrozhdeniye Island. For decades, Soviet biological weapons scientists tested some of the deadliest germs in the world there. Now their work is buried in a shallow, sandy grave у alive and, according to U.S. experts, a major threat to everyone on Earth. 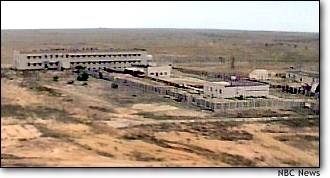 A view of the laboratory complex on Renaissance Island where the Soviet Union tested germ warfare.

“IT’S THE CLOSEST place I can imagine to hell,о Andy Weber, one of the first Americans to visit the island on a secret U.S. Department of Defense mission in 1995. Despite all the intelligence information the United States had on the island by then, even he was amazed at what he discovered.
“For me personally, for the first time in my life I really, at a deep level, understood what [former U.S. President] Ronald Reagan meant when he described the Soviet Union as an evil empire.о
Vozrozhdeniye, or Renaissance Island, as it translates in English, was a secret testing facility for the former Soviet Union’s germ warfare program.

When Weber’s team touched down by helicopter four years ago, he saw dozens of buildings now abandoned but once used to house more than 1,000 scientists and their families. Scattered about on the ground were hundreds of gas masks, empty cages and petrie dishes. Renaissance Island was where the world’s deadliest germs, including anthrax, the plague and smallpox, were developed. While smallpox was tested indoors, scientists regularly set anthrax free in the open air.
U.S. spy plane photographs taken in the 1960s identified the site as a possible biological testing area, but it was only some 30 years later when Ken Alibek, the former head of the Soviet germ warfare program, defected to the United States that the full story emerged.

OLD HABITS DIE HARD
Renaissance Island, throughout its history, was run essentially by a front company у a pharmaceutical firm in Moscow called Biopreparat. The company is still in operation today, and U.S. intelligence sources say so is the infrastructure to make biological weapons in Russia. After the fall of the Soviet Union in 1991, Biopreparat was privatized. Today it is run by former Russian army officers.

Biopreparat’s assembly lines once worked at dozens of large factories, including one in Stepnogorsk, now in present-day Kazakstan. During its heyday, it was the largest production facility of biological weapons in the world. Today, the U.S. government is paying million to have it cut up and dismantled.
At the top-secret facility, former chief Alibek engineered the germs to be super resistant to antibiotics. “People can die during a conversation, for example. They start bleeding through the nose and mouth, they die,о he said.

Renaissance Island was used as an open-air testing ground. At night, to avoid American satellite detection and because most biological agents are more effective then, Soviet scientists would move monkeys in cages downwind from the labs. Bomblets would explode overhead releasing deadly germs, like a fictional horror movie.
“The cloud would start moving towards the monkeys. They were crying because they knew they would die,о Alibek said. Thousands of Animals were killed.
“I think there was a sense of shock when we learned of the scale, the monstrous scale of the program and also how far it had progressed,” Weber, the U.S. Department of Defense expert, told NBC News.

TARGETING CAPITALIST ENEMIES
But the apparent target of the Soviets’ most sinister weapons was Americans. Alibek was ordered to prepare a strain of anthrax, smallpox and the plague to be delivered in the warheads of SS-18 intercontinental ballistic missiles pointed at American cities.
“New York, Seattle or Chicago, Boston,” Alibek said. “Believe me, depending on a very specific scenario, we would see very large numbers of killed and infected people.”
Bill Patrick, an American who made biological weapons for the U.S. government until they were outlawed, debriefed Alibek when the scientist defected.

“It’s almost unbelievable what they could have used on us,” he said. ”[It’s] incomprehensible. You cannot conceive of the casualties that would have occurred.”
In the 1980s, as the Cold War frost between Moscow and Washington was supposedly melting, U.S. and British leaders became increasingly aware of the Soviet bio-weapons program and pressured then-leader Mikhail Gorbachev to come clean. Gorbachev, according to Alibek, continued to develop biological weapons. When confronted with evidence that outside governments were learning more, the order was issued in 1988 to bury the evidence.
The anthrax was placed in 60-gallon drums and bleach was poured on top to neutralize the germs. According to U.S. sources, close to 100 tons of anthrax were then moved by rail about 1,000 miles to Renaissance Island. Officials charged with the burial, however, didn’t want to waste valuable steel drums, so they poured the anthrax out into 11 sandy burial pits.

LIVING, DEADLY THREAT
U.S. government sources said that when their inspection team took soil samples of the island four years ago they found the anthrax spores were still alive у an alarming discovery.
“The primary [threat] would be if a rogue nation or terrorist state was able to obtain access to these spores, which were perfected over many decades of work by the Soviet Union, and then culture them and deploy them as a bio-terrorist weapon against a subway system in New York or inside an airplane,” Weber said.
“Really, America is vulnerable to such an attack on our homeland, and that’s why we think it’s most effective to try to reduce the threat at the source.”

And U.S. officials told NBC News that the exiled Saudi millionaire Osama bin Laden, blamed by Washington for orchestrating bombings against U.S. facilities, is, in fact, seeking such agents, although there is no intelligence he has targeted Renaissance Island.

The Department of Defense Threat Reduction Program is now negotiating with the governments of Uzbekistan and Kazakstan, which share a border on the island, to remove or neutralize the anthrax.
The anthrax threat is now a ticking time bomb because the Aral Sea is shrinking, building a deadly land bridge to mainland Uzbekistan and Kazakhstan. The Aral, once the fourth largest inland sea in the world, is now two-thirds its original size, drained decades ago by the Soviets to make farmland for cotton.
To get a bird’s eye view of Renaissance Island’s threat, we chartered the only airplane in the area. The island is now separated from the mainland only by about two miles of water. And the water is not deep, most of it only chest high.
Experts fear that species of Animals living on the island, which can burrow in the sands, could be infected with plague or anthrax and carry drug-resistant strains of germs to humans on the mainland.
This summer, a 9-year-old boy living on the shores of the sea died of the plague. In September, there were two cases of anthrax infecting people in living in the district of Jambul, Kazakstan.

DANGEROUS WINDS
In Muynak, Uzbekistan, also on the shores of the Aral Sea, people are chronically sick in frightening numbers. In a local tuberculosis hospital, doctors shake their heads, fearful that rates of tuberculosis, some of the highest in the world, are increasingly drug resistant. There is also a high rate of unexplained cancers, and 90 percent of women suffer from anemia. 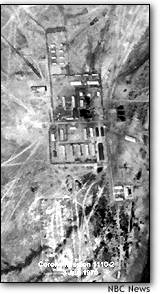 This image taken from the U.S. Corona spy satellite on June 3, 1970, shows a lab facility on Renaissance Island in the Aral Sea.

Most of the illness can be blamed on a deadly cocktail of pesticides used in cotton farming and dust blown up from the dry Aral Sea floor, according to Dr. Joost Vandermeer, who oversees a successful local tuberculosis program run by the French relief organization Medecins Sans Frontiers, or Doctors without Borders. But experts also question whether there is a link between the region’s widespread health problems and the island.
“We don’t know what has been tested, and what is there, and what’s not there and that’s exactly the issue,” Vandermeer said.
Uzbekistan refuses permission for journalists to land on Renaissance Island. But NBC News interviewed oil workers who had been drilling on the island. This year they drilled down some 4,200 feet, they said, and no one told them anything about buried anthrax or the deadly germs they could have been exposed to.
Even though Russia may well be sitting on deadly biological weapons reserves, there is little evidence that Moscow is preparing to use them. What chills the U.S. government the most, defense department officials said, is the prospect of those biological bombs falling into the wrong hands. They fear the new battle front for a terrorist could be any American city.