In the middle of the Aral Sea a former anthrax factory stands unguarded.

he war on terrorism will take the U.S.-led coalition to some far-flung frontiers, but probably none more desolate than the southern shores of the Aral Sea in Uzbekistan. Once a balmy oasis of apricot groves, fields of watermelon and rivers of fish so fat that each could feed a family, this is now a poisoned desert of salt and brown dust. The catalog of catastrophes that makes up one of the world’s worst environmental disasters includes mankind’s largest current tuberculosis epidemic and highest rates of anemia, the biggest dust bowl on earth and one of the most extreme ranges of temperatures—from 50C to minus 30C—on the planet. The landscape is not only inhospitable, it is also dangerous: on the island of Vozrozhdeniye, in the drying Aral Sea, is what used to be the largest biological weapons testing facility ever built.

Vozrozhdeniye, or Renaissance Island as it is known in English, was manned by some of the Soviet Union’s top scientists until 1991 when it was shut down and abandoned. The chipped mosaics of cats and dogs in the deserted kindergarten playground, the red jungle gym and blue swings evoke the happy childhoods of the offspring of the communist Elite who once lived here. There’s a vast, empty military parade ground, scores of abandoned trucks and bulldozers and barrack blocks where beds still lie made and pressed uniforms hang in closets. A few kilometers away is the laboratory, and somewhere here is buried the lasting achievement of this vanished community: weapons-grade anthrax.

The facility also tested smallpox, forms of plague and other, less commonly known, killer germs. «This is the best stuff the Soviets were able to come up with in 30 years of research,» says a Western analyst in the Uzbek capital Tashkent. Before the scientists left Vozrozhdeniye, they tried to kill all the lethal spores they had cultured. With anthrax, they failed. «Anthrax is particularly persistent,» says the analyst. «It’s still there, but there’s no telling where it is, no tubes labeled ‘anthrax.'» Washington has had a cleanup of Vozrozhdeniye on its Central Asia to-do list for years, but it ranked well below abandoned nuclear and rocket bases in Kazakhstan. Since the wave of anthrax attacks in the U.S., officials have realized they had better reprioritize. On Oct. 22 the U.S. signed an agreement with Uzbekistan to eradicate all vestiges of germ-warfare development from the island.

It may be too late: Vozrozhdeniye has been unguarded for a decade. The shrinking of the Aral Sea has revealed a peninsula that makes the island accessible by wading. The Uzbek state petroleum company even conducted test drills for natural gas. Although Washington believes no anthrax has been extracted, no one can be sure. «God only knows,» says the analyst. «There’s been nobody out there watching.»

But for those living nearby, anthrax is the least of their worries. Soviet siphoning of water from the Amu Dar’ya river to irrigate vast collectivized cotton farms turned the fertile delta into desert in a few decades. The Aral Sea split into two and receded to less than half its size. Rains failed. Without the sea, temperatures became erratic. What water remained was a concentrated cocktail of salt, minerals and pesticide runoff from the cotton fields upstream. Moynaq, the nearest town, watched its livelihood drain away with the parting Aral. The former bustling port used to can 70 million tins of fish a year and import millions of tons of grain and coal. Now Moynaq’s fleet lies beached in the desert just outside town, 100 km from the shore, its masts rusted sentinels in a fog of dust. The town is desiccated and almost deserted. The 2,000 people who remain strip the ship hulks for scrap and fish for chemically laced carp in a small, shrinking lake to the east. The population has abnormally high rates of acute respiratory infections and cancer, kidney disease, iodine deficiency, diarrhea, birth defects and defoliant poisoning. Close to 90% are anemic. 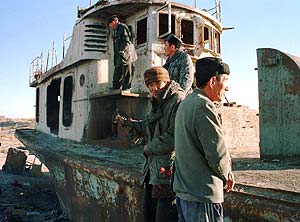 TB has killed 27 people since January 2000 and infected hundreds more. «Life here used to be so good,» says Borliqboy Olloyorov, whose creased face makes him look older than his 50 years and whose TB seems certain to kill him as it did his brother. «We had the sea, the breeze on the water, the fish. We drank water from the lakes and even the channels in the streets. If you do that now, you have to go to the hospital.» Olloyorov is mystified by American plans to clean up Vozrozhdeniye. «Nobody around here ever died from anthrax,» he says. «I don’t think they are here to help us.»